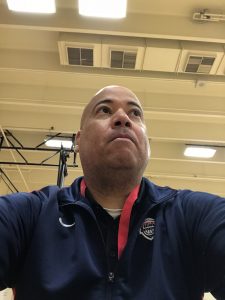 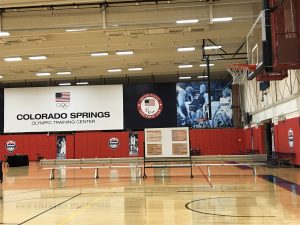 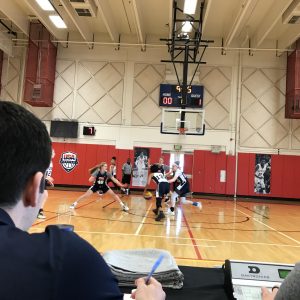 Coach Robinson made his eighth trip to Olympic Training Center in Colorado Springs, Colorado March 23-25, 2018.  As with the previous seven visits (’07, ’09-’14), Coach R kept a daily journal of the happenings so that you can follow along.

Friday, March 23: An early start to the day as my flight left Greensboro at 7:00 followed by a connector at 8:45 in Atlanta. I was the first of my three person group to land in Denver and on the way to pick up the rental car, the announcement was made that there was a dust storm approaching.  The times when I have flown into Colorado Springs, the weather has been mostly (knock on wood) uneventful. It has been the direct opposite when landing in Denver as on two other occasions I’ve walked out into a hail storm that covered the ground like it was snow and another time there was a tornado warning and everyone had to move into the many shelters within the terminal.

After the dust storm, I got the car and drove back to the airport to pick up Heather Stewart from San Jose’ and Ras Vanderloo from Iowa.  There are four coaches in this new group (Leadership Initiative) formed by USA Basketball: Heather, Ras, myself and Matt King who is from Arizona.  The drive from Denver to Colorado Springs is about ninety minutes. About twenty minutes into the drive I noticed a helicopter with a long rope hanging from it. Off in the distance there was a forest fire that the helicopter was heading towards.  We actually passed two forest fires on the drive in.

Once we reached the Olympic Training Center, Heather and Ras looked to me for direction which was kind of funny as I never looked at myself as a veteran of USA Basketball.  It was the first trip to the center for both of them and it made me realize how fortunate I was to continue to be invited back to work for USA Basketball. We checked in, received our credentials and went downstairs to eat lunch. As always, the food at the OTC is top notch. The OTC dining hall fuels the top athletes in the world so you’re going to get some of the best food that can be offered.

We went to Sports Center 2, met the staff, picked up our gear for the weekend and then headed to the dorm to change. After changing, we made our way back to SC2 to oversee the 3 on 3 shoot-around and warm-up. My job today was to make sure that no player entered the SC2 from the back door for the three to four hour shoot-around. It’s always amazing to me how simple a job like that is, but how many folks who were told not to enter or leave from that door tried to still do so.  That’s USA Basketball… the details.  Details lead to success (or failure) and I have learned that details are very important to why USA Basketball is what it is.

Following the shoot-around, we had a staff meeting about the weekend schedule then went back to the dining hall for dinner.  We watched some of the Elite Eight games on both the men’s and women’s side of the NCAA tournament, then went back to the dorms. My next job was to monitor dorm curfew which was 10:00 with the entire staff. The last time I stayed in the OTC dorm was the first year I was invited which was 2007; again, if it meant sleeping in the hallway, it wouldn’t matter – just glad to be back.   Everyone was settled down around the appropriate time and now looking forward to the games on Saturday.

Saturday, March 24: Day two started off early for me.  I got up at 4:00 A.M. Mountain Standard Time (6:00 our time in Winston-Salem) and got ready for the day which started at 7:00.  After doing getting some “work” to make sure everyone was where they needed to be back home, I got some breakfast and headed to Sports Center 2 to help setup for the start of 3 on 3.  We had a brief prep from Andrea Travelstead who was heading up the event and we were off and running. The talent level on the girls side was impressive from the start.  There are at least four girls teams that I think can win this tournament.  On the boys side, there are two, maybe three that I think have a legitimate shot at taking the title.

3 on 3 is unique in that even though each team has a coach, the coach is not allowed to coach in the event. The team has to figure things out on their own and the game moves so fast that the teams with quick thinkers (and obviously some skill) are the ones that will probably win.  Games ran pretty much all day, with a break in between for lunch, and once again, my roles swung between being a court monitor (which included crowd control… the crowd can cheer but again, can’t coach) and keeping the score sheet.

After the games were done for the day, our staff met for a quick recap of the happenings, and then we broke into small groups for dinner.  Jay Demings, who is over the USA Basketball Youth Division, Don Showalter who is the men’s junior national team head coach and now runs camps and clinics for USA Basketball across the country, and Andrea took the four members of our committee (Matt, Heather, Ras and myself) out for dinner. Don’s wife joined us.  Because the Elite Eight games were on and the restaurant was rather noisy we didn’t discuss much concerning USA Basketball over dinner. Jay invited us to walk two blocks in downtown Colorado Springs to their soon-to-be new offices so we could have a quiet space to talk.

I’ll state that the new offices are pretty impressive and I hope to get the opportunity to visit again to see what the finished product looks like.  We met for about an hour and the ideas they presented to us about the current state and the potential future of USA Basketball Youth was pretty exciting. Those who know me know that I am always looking for that next “thing” to help not just all of my programs back home, but the overall state of girls basketball, grow.  When we were done meeting, I left feeling that the potential growth and overall opportunity to help stabilize things in the girls basketball arena (at the youth level) was limitless.  Again, just the fact that USA Basketball feels like I can do something to help not just girls basketball but basketball in general at the youth level across the country is really exciting.  I am looking forward to the future and will see what it brings.

Sunday, March 25: The last day of the trip began early again, waking up around 4:00 EST (6:00 MST) and beating the crowd to the lobby so I could get some “work” done again. After breakfast, I went to Sports Center 2 to help with the setup for an introductory 3 on 3 program featuring eight local YMCA teams.  There were three girls teams and five boys teams ranging from grades 3-6 that participated.  We used modified rules to help the kids learn the concept of playing 3 on 3.  After two or three games, the kids started to pick up on how the game worked and the eventual top two teams from the girls side and boys side got to play in Sports Center 1 where the U18 3 on 3 National Championships were being played.

Once all the activities in Sports Center 2 were completed, we all moved to Sports Center 1.  My job was to monitor the scorer’s table for the quarterfinals and semifinals, then run the clock for the 3-6 grade games.  Then I got the job to run the scoreboard and clock for the girls championship game and then the boys championship game.  Running the clock during 3 on 3 is not the same as running the clock in a normal game. Since the game is played on a half court and the score can change in an instant, I had to be on my toes.  Add to that the intensity of the game being for a national title and a trip to Buenos Aires for the winner, and I couldn’t afford to make a mistake.  I tend to like moments like this though and wasn’t overly concerned.

I feel like everything in life prepares you for the next step in life and in my case running a clock in a high intensity environment with a lot on the line took me back to when I was in high school and had to run the clock in an adult league at Miller Park.  I remember all of these men yelling and screaming at each other all of the time and it was all the referees could do to keep order.  My job then was to do just that… my job and remain basically and integral part of the game, but where no one paid any attention to me unless I messed up. I did my best not to mess up then and drawing on that focus from way back when served me well today.  It really is interesting and neat to see the future of women’s basketball playing now at the 15/16/17 ages.  I look back to the U16 and U17 women’s team that I got to be assistant for back in 2013 and 2014 and how many are playing in the Sweet 16 now:  Katie Lou Samuelson, Asia Durr, Lauren Cox, Kalani Brown, Arike Ogunbowale’, Crystal Dangerfield and Sabrina Ionescu.  Today, I am sitting front and center watching Paige Bueckers, Sam Brunelle, Haley Van Lith, Aliyah Boston, Azzi Fudd and several other future high level DI kids and curious to see how their careers will turn out.

Again, USA Basketball continues to provide me with unique opportunities that the average club or high school coach doesn’t get to experience.  I don’t take any of this for granted, hopefully never will, and hope this isn’t my last trip to Colorado Springs and USA Basketball.  Always glad to maybe bring something positive back to share with my Stealers’ program. If I can’t share any of these opportunities with those wanting to learn and improve then it’s almost pointless to be a coach.  Coaching is sharing… it’s a responsibility that I have, but again, it is for those who want to learn and are willing to listen.