“It’s your place in the world, it’s your life. Go on and do all the good you can with it, and make it the the life you want to live…remember you have a gift… share it with others.” – Anonymous 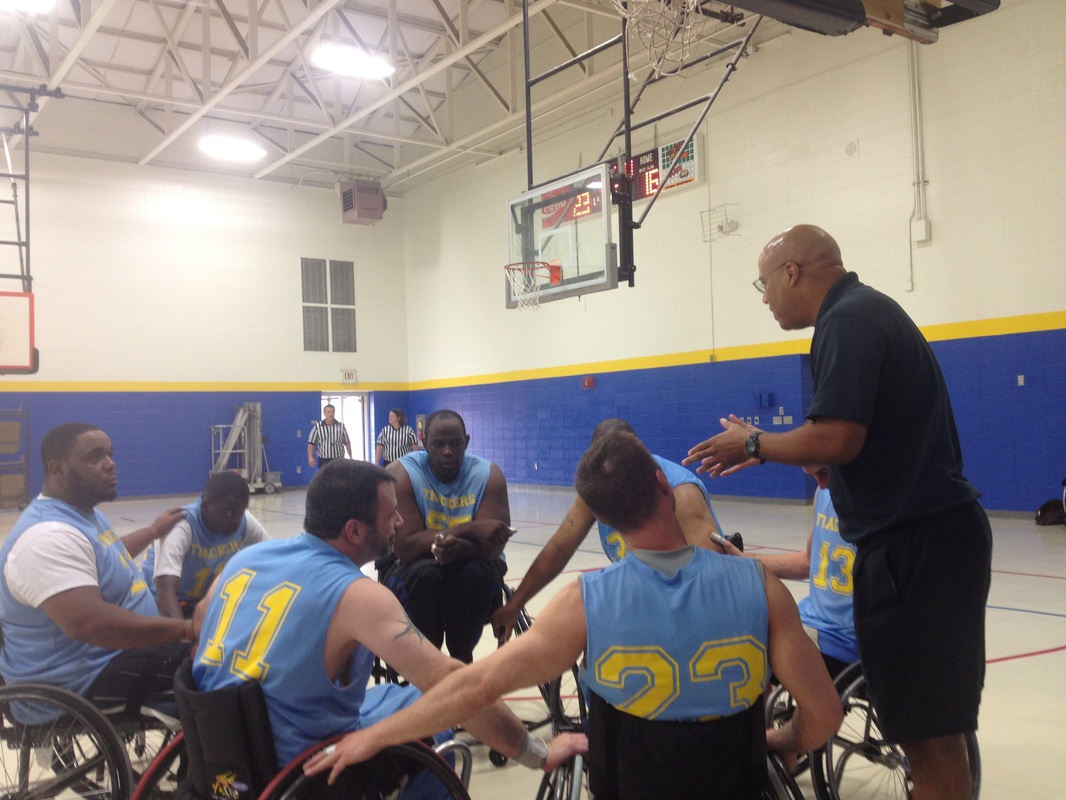 The Triad Trackers is our area’s adult wheelchair basketball team.The Trackers were founded in the 1980s, and have experienced some success in the Carolina Wheelchair Basketball Conference.  The conference consists of teams from North Carolina, South Carolina and Georgia.Recently, the Trackers have been without a head coach and some overall support, organization and infrastructure.  Some wonderful volunteers in the Winston-Salem / Triad Area have kept the team afloat.In June 2013, Coach Robinson was approached about possibly coaching the team.  He agreed and has since tried to bring some stability to the Trackers by attaching the team to the Winston-Salem Stealers Program.If you know of anyone (14 or over) in the Triad Area that is looking for a way to stay active and be part of something positive,  male or female, the Trackers could be their answer.Click HERE for a January 2013 article on the Triad Trackers.Visit the Triad Trackers on Twitter @Trackers1111.GO TRACKERS!!!
Visit our website at www.triadtrackers.com
Wells Fargo Story On Triad Trackers’ Travis Smith!!! 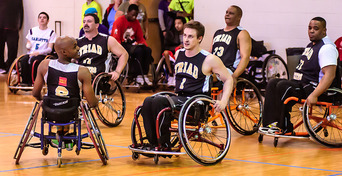 The Trackers are in the process of raising funds to upgrade their equipment for the 2017-18 Season. 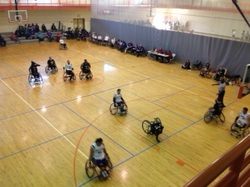 The Triad Trackers wheelchair basketball team finished 3-2 over the weekend at the Carolinas Wheelchair Basketball Tournament held at the Gateway YWCA in Winston-Salem.

The Trackers finished in 7th place which is a three game improvement over last season’s finish.

Our home games vs. Spartanburg on September 14, 2013 were featured on WFMY – Channel 2.To view the story, click HERE.Click HERE to view the slideshow 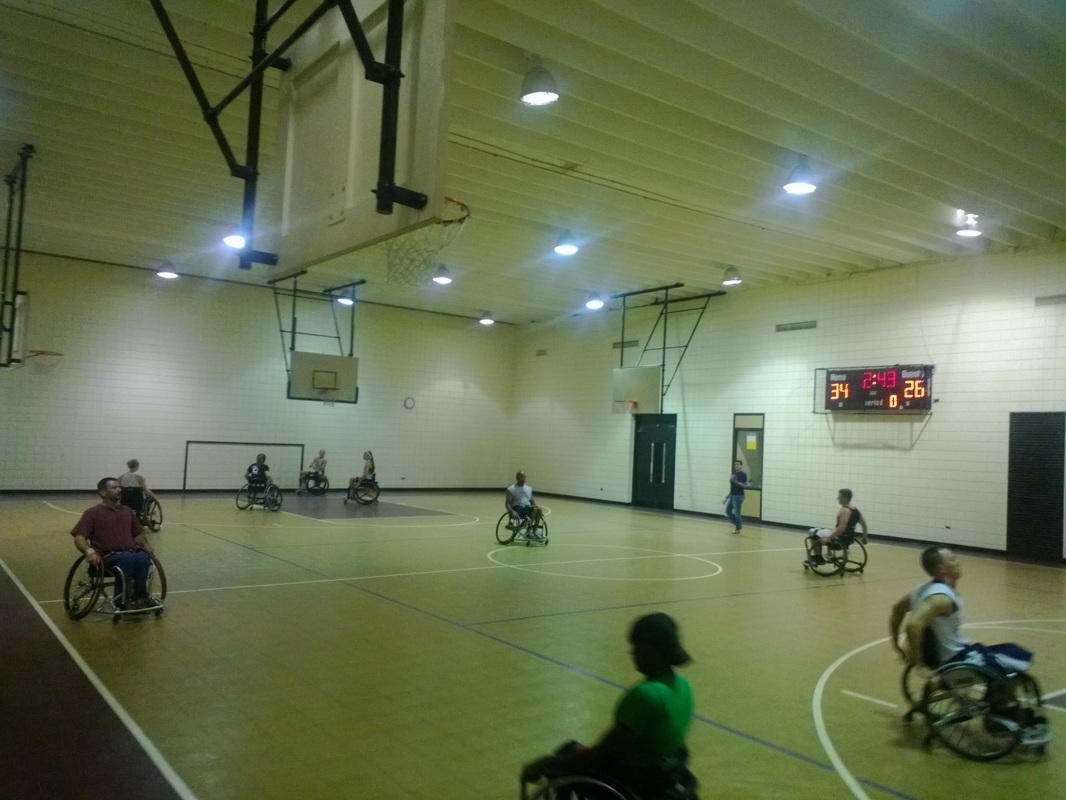 HIGH POINT — For once, the Wesleyan Christian Academy boys basketball team was clearly outmatched. Its players were slow and out of sync while their opponents were quick and sharp.

But the Trojans kindly accepted defeat, because it wasn’t the likes of rivals High Point Christian or Greensboro Day that so thoroughly humbled them. Instead, it was the Triad Trackers, an area wheelchair team.

On Saturday at the school, Wesleyan, which features a number of the state’s best players and is coming off a championship season, experienced what it’s like to play wheelchair basketball, as the teams faced off in an exhibition game to raise money for the Trackers — nearly $2,000.

“It was a very humbling experience,” said Trojans player Donovan Gilmore, who has committed to the College of Charleston. “Watching people in a wheelchair and then playing it yourself gives you a totally different perspective.

“It’s hard both mentally and physically. Every shooting mechanic I’ve ever learned went out the window in the wheelchair,” he said with a laugh. “But this wasn’t just about basketball. This was an experience for us and what we could learn from it.”

From the start, the Wesleyan players encountered the challenges of being in a wheelchair, like simply moving up and down the court. And then there were the added basketball movements, like dribbling and shooting, that were quite difficult.

At one point, Theo Pinson, who hit an early 3-pointer, dribbled confidently out on the wing, only to dribble off his wheel and out of bounds. He and his teammates could only chuckle at their miscues, while the Trackers were at ease with speed and precision.

“This was probably one of the most fun things I’ve done in my whole life,” said Pinson, who has committed to North Carolina, with a grin. “Just seeing everyone in their wheelchairs trying to compete against them — they’re really good. It was tough.

“My arms are hurting, fingers hurting, legs hurting — it’s very difficult. They’re very passionate about what they do. I knew they’d come in and play hard, but just seeing them firsthand just showed me how honored they are to still be playing basketball.”

For the Trackers, who include players who had accidents, are war veterans or who were born with disabilities, Saturday’s game was simply an opportunity to showcase their skills on the court and their shared enjoyment of basketball with others.

“It’s always fun for me,” Trackers player Michael Lambourne said. “That’s the main reason I play it – it’s for fun. Getting the word out there against able-bodies shows them just how different the game is compared to stand-up basketball.

“It’s always an eye-opener for them to see how well we move, how fast we are and how well we handle the ball. I don’t know if these guys have the perspective that we sit like a bump on a log, but it just shows that we can move just as well as they can.”

The Trackers, who won Saturday’s game 40-39 even after flipping the halftime score and giving Wesleyan a 26-point lead, next play a doubleheader against a team from Maryland on Saturday afternoon at 1 and 3 at the Hartley Drive YMCA.

“It’s been a lot of fun,” said Brian Robinson, who is in his first season coaching the Trackers and who also coaches the eight-time state champion Bishop McGuinness girls. “The last two and a half months have been great.

“I didn’t know what I was getting myself into,” he said with a laugh, “but it’s really been something nice — not just for the team, but also for people around the area, just like today. Today was great.”

The Trackers went 3-2, winning their first 3 games in Spartanburg, SC, to finish in 3rd place.